What Is Standing Desk?

What Is Standing Up While Working?

Standing up while working is a new type of work. It is a perfect solution for the limited work space that needs to be equipped with a display, a host and a keyboard at the same time. It is suitable for families and personal study rooms, libraries, educational places and other public spaces. It advocates that employees can choose to work in a standing posture instead of a sitting posture, and physical relaxation can promote mental relaxation. On the one hand, it improves work efficiency and on the other hand helps employees to be healthy. Need to use both hands to raise and lower the height of the table with a rocker.

The standing desk that does not need to be installed can be placed directly on the original desk. With the help of a gas spring, both hands can be raised and lowered.

What Is Standing Desk?

Sitting too much is harmful to your health. People who sit a lot every day are at increased risk of diabetes, heart disease and premature death. In addition, sitting alone burns very few calories, and many studies have linked it to weight gain and obesity. For office workers, this is a major problem because they sit for most of the day. Fortunately, standing desks are becoming more and more popular.

Using this type of desk can partially offset the harmful effects of sitting too much. 1. Standing can reduce the risk of weight gain and obesity

Weight gain is ultimately due to the intake of more calories than burns. Conversely, burning more calories than you will cause weight loss. Although exercise is the most effective way to burn calories quickly, it is also beneficial to simply choose to stand instead of sitting. In fact, compared to an afternoon of sedentary work, the equivalent amount of time spent standing has been shown to burn 170 times the extra calories. Just at your desk every day, the calories burned every week increase by almost 1,000 calories. This difference in calories may be one of the reasons that sitting for a long time is closely related to obesity and metabolic diseases.

Generally speaking, the more blood sugar levels rise after a meal, the more harmful it is to your health. This is especially true for those with insulin resistance or type 2 diabetes. In a small study of 10 office workers, standing for 180 minutes after lunch reduced the increase in blood sugar by 43%, while the waiting time was different. Both groups took the same steps, indicating that the smaller peaks were due to standing rather than extra body movement around the office. Another study involving 23 office workers found that alternating between standing and sitting every 30 minutes during the entire working day can reduce peak blood glucose by an average of 11.1%. The harmful effects of sitting after meals may help explain why sedentary time is associated with a 112% higher risk of type 2 diabetes. Studies have shown that using a standing desk at work can lower blood sugar levels, especially after lunch.

3. Standing may reduce the risk of heart disease

The idea that standing is good for heart health was first proposed in 1953. A study found that compared with colleagues sitting in the driver’s seat, bus conductors who stood all day had a 50% reduction in the risk of heart-related deaths. Since then, scientists have gained a deeper understanding of the impact of sitting posture on heart health, and long sitting is thought to increase the risk of heart disease by as much as 147%. It is so harmful that even an hour of vigorous exercise cannot compensate for the negative effects of sitting all day.

There is no doubt that spending more time on the feet is good for heart health.

It is generally believed that the longer you sit, the greater the risk of heart disease.

4. A standing desk seems to reduce back pain

Back pain is one of the most common complaints of office workers who sit all day. To determine whether standing desks can improve this situation, several studies were conducted on employees with chronic back pain. Participants reported that after a few weeks of using a standing desk, lower back pain improved by as much as 32%. Another study published by the Centers for Disease Control and Prevention (CDC) found that using a sitting desk in just 4 weeks reduced upper back and neck pain by 54%. In addition, removing the standing desk can undo some of the improvements within 2 weeks.

A number of studies have shown that standing desks can greatly reduce chronic back pain caused by sitting for a long time.

5. A standing desk helps to improve mood and energy levels

Standing desks seem to have a positive effect on overall health. In a 7-week study, participants who used standing desks reported less stress and fatigue than those who sat all day long. In addition, 87% of people who use standing desks reported increased energy and energy throughout the day. After returning to the original desk, the overall mood returned to its original level. These findings are consistent with broader research on sitting posture and mental health, which correlates sedentary time with increased risk of depression and anxiety.

A study found that standing desks can reduce stress and fatigue, while improving mood and energy levels.

6. The desk can even increase productivity

A common concern about standing desks is that they hinder daily tasks, such as typing. 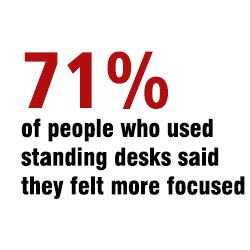 Although it may take some time to get used to standing up every afternoon, the standing desk does not seem to have a significant effect on typical work tasks. In a study of 60 young office workers, using a standing desk for 4 hours a day had no effect on the characters typed per minute or typing errors.

Considering that standing can also improve mood and energy, using a standing desk is more likely to increase productivity rather than hinder productivity.

Studies have found that there is a close link between increased sitting time and early death. Considering the sedentary time, the close link between type 2 diabetes and heart disease, this is not surprising. In fact, a review of 18 studies found that people who sit the most die 49% earlier than those who die the least. Another study estimated that reducing sitting time to 3 hours a day could increase the average life expectancy of Americans by 2 years. Although these observational studies cannot prove cause and effect, there is enough evidence that standing more can extend our life.

Studies have shown that reducing your sitting time can reduce your risk of premature death, so it can help you live longer.

Reducing sedentary time can improve body, metabolism and even mental health. This is why sitting less and more is such an important lifestyle change. Previous: The Ergonomic Difference Between Working At A Standing Desk Vs Sitting
Next: Top 5 Racing Gaming Chairs